Quote of the Day - Mitch Hedburg

When did “visitation” become “parenting time”?

In dealing with an issue up north, I was reading something that kept referring to "parenting time".  My first thought was that this was just this website's way of being kind and patronizing to non-custodial fathers parents. Further research showed me that not only is this now an official term, but it is used by other states as well.

This is ridiculous to me.  As a non-custodial parent of nearly 20 years (and counting) I'm more than sensitive and empathetic to the plight and sensitivities of those to whom this is direct.  But this is beyond silly.  What is this politically correct notion that you have to attempt to change the meanings of words to make someone feel better?  Do they really think that by calling it something different that it's actually going to affect the practice itself?  Of course it won't!  You can change the name of something, but it doesn't change what it is.  It's still visitation!

A non-custodial father visits his kids.  There's no other way to put it.  She has custody.   It's not really "parenting time" because you simply can't "parent" every other weekend.  You can't parent if you add one night a week and half the summer.

The irony of this whole renaming scheme is that by calling it parenting time they devalue another term that the political correctness crowd holds dear: "single parent".  They don't look at the term to mean "a parent that is single" but rather "a single who parents alone".  If a noncustodial now has "parenting time" rather than visitation, they they too "parent".  If two people parent, they aren't parenting alone now are they?  And if she's not parenting alone, "single parent" has lost much of its value and power as part of our lexicon.

There's another way this dilutes the term "single parent".  If a non-custodial parent (who has no children at home and isn't married) now has "parenting time", he must be, by definition, a single parent.

The problem with political correctness is that they want to have it both ways and they can't.  I won't allow it.

The Video Game Accessory of the Future

[CE: The Oculus Rift and the Vive look just like this when you get them out of the box]

I just can't stop laughing at this.  Every time I look at it and think of something to say about it, I keep laughing.  I'm not even going to try to explain it except to say that it's real and it's current.  Click the pic to go see. 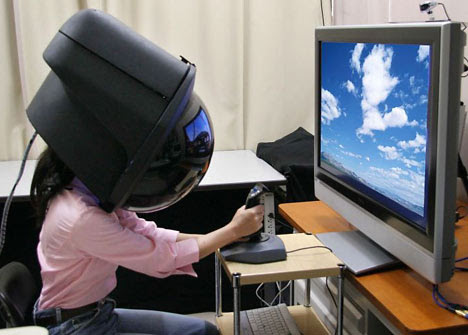 Funny Link of the Day

Shamelessly taken from Overheard in the Office:

[CE: Little did I know that as smartphones became popular, this word would describe most of what comes on it.]

A takeoff of the word Applet which is basically a small application or a piece of code that runs on a much larger framework but does a small task.

Craplet - A small program written to perform a specific task without regard to the quality of the code, specifically error trapping.

It's a difficult thing to have to admit, but I'm afraid it's true. As I come clean and admit my horrible bias, let me give you a little backstory first.

In my career, I listen to a lot of podcasts. For the uninitiated, podcasts are just downloadable audio talk shows on whatever subject you may choose. Mine are obviously technical oriented. Some are good, some are awful, some purport to be related to one subject and then for some reason choose to focus on another (a rant that will come later today). But regardless, they are all technically related.

I tried listening to one called Plumbers @ Work. The content is actually pretty good but there's one huge problem.

Having grown up near Canada and having watched NHL hockey all my life, I'm very sensitive to Canadian accents. I hear them without even trying. The problem is that while it's amusing during a hockey game, it's very irritating while I'm trying to work. I'm trying to work and I keep hearing things like "I'm a-boot to do a conference that's a-boot .NET" "It's a-boot time Microsoft did something a-boot that problem. I get emails a-boot that all the time."

And another thing. You know the round pork-based meat that we put on Egg McMuffins? It's HAM! It's not bacon, it's HAM!! Putting the word "Canadian" in front of something won't change what is. Just because you don't have a cuisine of your own doesn't mean you should go trying to co-opt meats as something that's yours.

"Mmmm...this is good turkey!" "It's not turkey, it's Canadian chicken!"

And what's with your flag?

A big leaf? At least you have a good national anthem. I suppose that has to count for something.

See? This is what happens when I have to listen to Canadian accents. I need to get back to work.