Whoever came up with the idea of taking a cheap, tinny speakerphone and putting it on a regular desktop office phone deserves to be shot.  If you've ever worked in an office, you know what I mean.  I'm referring to the Town Crier who loudly announces to all within earshot (which he makes certain is pretty far) everything that's going on.

Here I am at my cubicle with my headphones on, minding my own business and programming.  Clear across the room, there is a guy practically yelling, followed by two different voices coming over the phone.  I go over to the break room where his desk is nearby and there he is.  That's right, he.  Not they, but he.  All by himself.  And he's sitting in his chair leaning forward and putting his face about 6 inches from his phone.  I pause and look around.  There's nobody else there.  At all.

Am I missing something here?  I half expected to hear from the speakerphone, "Watson!  Come here!  I need you!"

Speakerphones were made for a reason, or a couple actually.

You'll notice that conspicuously absent from that list is "want to feel important".

What goes through a person's head (besides the wind) that would make them think it's ok to interrupt the work of 11 other people when it's not necessary?

And then there are the Buffalo.  I call him/them that because they roam.  Apparently at some point in their lives they bought a cell phone and the salesman told him that it had free roaming so he assumed that this is what he should be doing.  Roaming.

Same cubicle, same desk, half hour after the Town Crier.  Again, minding my own business and programming.  This loud voice comes from way down the hall, but it's a lone voice. Clearly he wasn't talking WITH anyone he was talking AT someone.  On his phone.

So here is this highly paid manager who drives a very high end vehicle walking down here using one of these ancient earpieces. [CE: This is ancient for 2006 even] 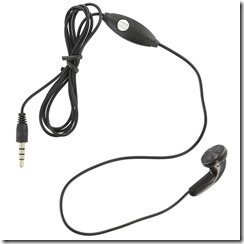 Have you ever used one of these things?  you see that little bulge on the cord?  Basically, it's a microphone encased in its own cocoon of plastic with a tiny hole drilled in it.  If you're really, really lucky, the hole might actually be facing the front where sound could hopefully go in, but more than likely it'll just lay against your shirt. If you've never used one, the only thing you can do (aside from the tragically obvious solution of getting an earpiece that doesn't suck) is just talk louder.

So, Buffalo man goes wandering all over the building, letting everyone know how important he is, practically shouting into his 1996 earpiece.  Getting work done is a near impossibility.  And yet it's these same managers who can't understand why most programmers are more efficient at night.